Building Update: The Saga of Replacing the Church Lift

The old lift had developed mechanical problems that could not be repaired.  It had become increasingly noisy and had developed a vibration or ‘shake’ that caused people to be concerned about using it.  The manufacturer no longer makes that style and repair parts are not available.  A refurbishment or upgrade of the old lift was not an option.  Additionally, the lift’s current location is the only place in the building where it can access all four levels. 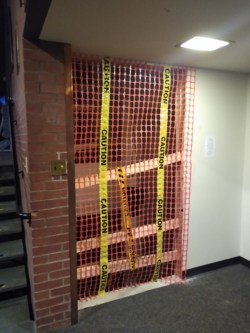 The project to replace the lift started almost 3 years ago.  We identified two potential vendors that make lifts that might fit our needs.  The process of identifying the requirements and requesting proposals took several months. The replacement lift had to fit in exactly the same space as the old one.  The doors could not be any wider or higher, because the door frames fit tight against the building structure (walls and ceilings).  At the end of that period we had an estimated cost from each of the vendors based on some very general assumptions about what would work.  We knew that some amount of carpenter work would be needed to finish up around the new lift doors, but had only a rough idea of what that would actually entail or what it would cost.

The board approved the project based on these initial estimates, and asked the endowment fund to allocate $60,000 for the work.  The Endowment Committee agreed and we continued to finalize the design.

A complicating factor was the change in building codes that now require fire rated doors with automatic power door operators.  The need for fire rated doors was resolved by making the door at the top level only partial height, so it does not completely block the opening into the lift shaft.  This allows the smoke from a fire in the lift shaft to flow out into the main building space, where it would be identified and reported by our fire alarm system; eliminating the need for fire rated doors.  As an interesting sidelight, this required discussions with the city building inspectors, who ultimately determined that our building has only two floors, even though there are intermediate levels that require the lift to have four stops.  It was that determination that allowed us to use the single partial height door instead of fire rated doors at all levels. 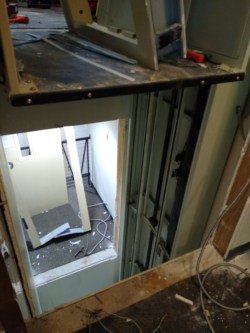 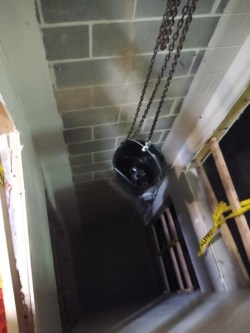 One of the two suppliers that we were working with ultimately decided that they could not provide power door operators that would fit into our space, so we were down to only one possible supplier.  We worked with that supplier for several more months to come up with a final design that met all of our needs and would fit into the existing space and openings.  There were a total of 11 design iterations (and drawing sets) that we reviewed and revised before the final drawings were approved.

The contract to purchase the lift from Access Elevator and Lifts (AEL) was finally signed in January of this year (2022), with an expected delivery at the middle of April.  At the same time we retained Brad Butler Construction to work with AEL on restoration and repairs to the building finishes.

While waiting for the lift to arrive, we did some preparatory work.  A new electrical panel had to be installed in the basement wall across from the lift door.  We also had to install a temporary lifting eye at the top of the lift shaft so AEL could support the lift structure during the installation.

After several delays, the lift finally arrived in Des Moines the last week of May, and the installation work started in early June.  The first task was to remove the old lift.  This was completed on June 8.  Installation of the new lift started the following week, and was going more or less as planned until AEL discovered that some of the parts were the wrong size.  The factory had to make new parts, which took several weeks to fabricate and ship.  We also discovered that the restoration work was going to be much more extensive than we expected, both because of what we found in the walls when the old doors were removed, and also because of the way the new doors needed to be fit into the wall spaces. 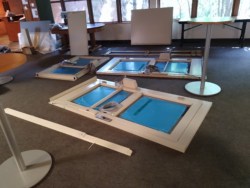 The replacement parts were received in mid July and installation resumed.  But, again, one of the parts was not correct and another delay occurred while it was replaced.  The new parts are expected to arrive this week and the installation should then be shortly completed.

Once the lift installation is completed, Brad Butler can begin his finish restoration work.  Scheduling that work is another problem, since he was planning to have this done several months ago, and his schedule is now full.  We are currently working with him to finalize exactly how we want to do the finish work, and when he can work it into his schedule. 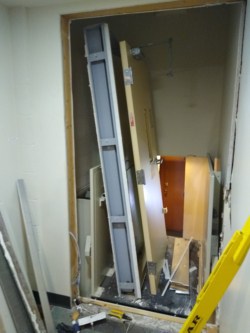 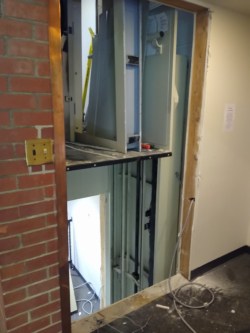 The current plan is to have the new lift in service by the middle of August.  And it only took three years to get it done!