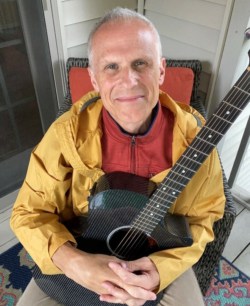 Minnesota’s Peter Mayer has been singing and songwriting full time for over 20 years, performing in venues across the United States and beyond. He writes about life on earth, the mysterious and wondrous fact of our existence, and the vast cosmos that surrounds us. He also writes about pumpkins and dress hats, fake plants and pajamas, as well as love and freight trains just like a proper folk musician should. His songs have been performed by Kathy Mattea, David Wilcox, Claudia Schmidt, Darryl Purpose, Billy Jonas, and Ronny Cox, to name a few. His work has been included in song books, church hymnals, and folk radio playlists across the country. Peter has eleven albums to his credit, and has sold nearly 100,000 of them. He lives in Stillwater, Minnesota with his wife and two daughters.

“Mayer’s songs are crafted like Shaker furniture, with no place for superfluous embellishments or throwaway lines…(his) world is bright and hopeful and the transcendent nature of his lyrics…explore the mysteries of life…Mayer’s fluid, clean, and tremendously intriguing guitar playing is topped with warm, rich vocals. This is music for the soul.”

“I have a thing for science-savvy songs and singers. They’re out there, but no one I’ve found—no one—delivers the goods as well as Pete. So much of his music captures the joy, wonder and awe that drive every great scientist I know. Pete’s passion, beautiful mind and playful soul are in all his tunes. He even made me feel better about wearing a grown-up hat. Thanks, Pete! I love your work.”

–Mat Kaplan, Host of the Planetary Society’s Planetary Radio and the NEXT series of public science events for Southern California Public Radio

“Peter Mayer is a magician…(his) universe is full of metaphor and meaning, story and symbol—everything contains more than meets the eye.”

“If you love melody, if you love to laugh, if you love the universe and all of the marvels that astonish us every day of our lives, then Peter Mayer’s music is just what the doctor ordered. Take my word for it.”

–Brian Thomas Swimme, author of “Journey of the Universe”

“His guitar work is breath-taking, his lyrics mind-spinning, his singing soul-soothing and his feet-on-the-ground optimism nothing short of healing.”

“Peter Mayer makes it look easy—beautifully crafted songs that pose eternal questions—his arrangements make it sound like there is certainly more than one man and his guitar in the CM Satellite Radio studios.”

“He is unafraid of complicated topics and always strives to look beyond the easy sentiment…Peter does nothing less than address the very nature of our existence…Trust me, most songwriters can’t pull this off. Peter Mayer does.” 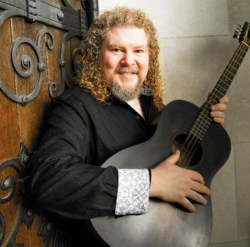 Listen: Lady of the Harbor

Joe Jencks is an international touring musician, award-winning songwriter, and celebrated vocalist known for his performances of musical beauty, social consciousness and spiritual exploration. A 25-year veteran of the international Folk circuit, Jencks has released 15 CDs in that time. Merging conservatory training with his Irish roots and working-class upbringing, Joe delivers engaged musical narratives filled with heart, soul, groove and grit. Blending well-crafted instrumentals and vivid songwriting, Jencks serves it all up with a lyric baritone voice that has the edgy richness of a good sea-salt caramel.

Joe’s most recent solo CD, The Coming of the Years – released August, 1, 2022, is an album centered around songs Joe Jencks wrote while on tour in Ireland over a 12-year period.  This album emerges as a synergistic blend of Jencks’ Irish and Celtic heritage with themes of immigration  spanning multiple generations.  As a dual U.S./Irish citizen, Jencks has been swimming in these waters musically and personally for decades.  The Coming of the Years is a deep musical exploration of identity and place, carried forward by beautiful melodies, expressive vocals and rich lyric narrative.

Joe’s 2018 release – The Forgotten: Recovered Treasures From The Pen of Si Kahn – contains 14 previously unrecorded songs from American Folk legend, Si Kahn. Joe recorded the CD in Canada, with famed producer Ken Whiteley, and the collection of songs represents a return to Joe’s more traditional Folk roots in both theme and musical styles. Celebrating the lost legends of hard working people from New England textile mills to Appalachian coal mining towns, from the Civil Rights movement to forgotten industrial towns in the Midwest. The Forgotten shines a welcome light on the lives of people whose experiences still need to be told and remembered.

Jencks’ 2017 release – Poets, Philosophers, Workers, & Wanderers debuted as the #1 CD on the International Folk DJ Chart, also garnering recognition for #1 Song and #1 Artist. Additionally the recording spent eight weeks as the #1 CD on Sirius XM Radio’s Americana Chart. Having penned several #1 Folksongs including the ever-relevant “Lady of The Harbor,” Jencks has become a fan favorite throughout North America. Co-founder and a vocal arranger for the harmony trio Brother Sun, Joe is also in demand as an arranger with over 30 appearances as a guest vocalist on various studio recordings.

From coffeehouses to Carnegie Hall, Jencks has made a mark on the American music scene, singing and telling stories that educate, illuminate, and uplift. For more information on recordings and concerts, please visit: www.joejencks.com

“The key to the future is people joining in. The music of Joe Jencks captures this essential spirit. Joe is a fantastic singer who carries on the traditions.”

“If one can master a craft after investing 10,000 hours, Joe Jencks’ hours are showing! I am literally stunned by this new album. Poets, Philosopher, Workers & Wanders, tells our stories, his story, and the untold stories, as an American folk master can – with heart and unfettered perfection. Add this one to the folk canon! ”

“In these times, we need the singers who will do the homework and tell the stories! Joe Jencks is among the fine next generation singers who are ready to carry on the tradition as well as look into the future”

“Beyond the fine selection of songs and the talented team assembled in the studio, what really shines through on Joe Jencks’ new album are his resonant, honey-rich voice, his open-hearted humanity, and his commitment to social justice. We need artists who inspire our better selves more than ever, don’t we?”

“Climb inside the songs of Joe Jencks, and you meet real people. His lilting melodies and warm, caramel tenor draw us closer to the stories he tells. Jencks finds the humanness that binds us to the people in his songs!”

April 22, 2023
7:30 p.m.
Listen: Harlan
It may be her haunting, husky voice that first grabs a listener, the way it glides over melodies like smoke, but it’s the songwriting that Spicer really wants you to hear. Her songs have a grit, even when they ache, and still can exude a playfulness when she’s on stage.Wanderlust spills from her songs, with topography that covers languid Pennsylvania farmlands, quirky roadside stops, and an occasional turn down an LA dark alley with flickering neon..Or, as she might say with a slight drawl, “Water, wine and whiskey.”
Called “fearless” by the San Antonio Express-News, Spicer drew attention the first time she played an L.A. club on a whim. Ears perked, and she was on her way to a rare Mainstage Kerrville Folk Festival debut, three Kennedy Center performances, song placements in several high-profile TV shows (Party of Five, Dawson’s Creek), and quirky indie films. But Spicer initially regarded music as something she could walk away from any time, until a potential record deal fell through. As she envisioned the future slipping from her grasp, she had a startling realization. “I finally figured out,” she says, “this is not what I do. This is who I am.’” With that faith came a new fierceness to her work, and it has resulted in five albums of stunning music brought into the world.
“While it is only my opinion that Spicer is going to be the next member of the Nashville royal family, it certainly helps my argument that I’m not the only critic saying as much.” – No Depression
“Wow and Flutter” certainly makes it worth the wait for long-time admirers; it’s also a compelling entry point for new fans and one of the best albums, any genre, of the past decade.” – PopDose
“No matter how many new albums are still to come before we make it to the end of 2017, it’s gonna take a doozy of a challenger to knock Amilia K Spicer’s “Fill Me Up” off the top of my list of the most beautiful songs of the year.” – Lone Star Magazine
“It’s collections like this that seem to mark her for posterity.” – Skope
“Occasionally, someone like Spicer emerges from the lists of names, stacks of CD’s, and pages of emails that is like finding a pearl in a boatload of oysters.” – David Arnsberger, Sun Radio 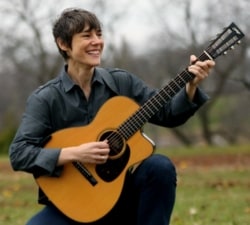 There’s just something about Ellis Delaney. At once funny and wise, thoughtful and uninhibited, with a captivating voice that is matched by tender, sometimes funny, uplifting lyrics. If you looked up the definition of open-hearted in the dictionary, you just might find a photo of Ellis there. Their performances are transformational; leaving audiences feeling better, with softened edges & opened hearts.

Ellis is a performer with a mission. Believing that music is healing, they regularly offer their music for free / pay what you can online. Also, Ellis offers a “Right on Time” hotline message that supports resilience by sharing different grounding / mindful practices, as well as a reminder each week that we are interdependent and worthy of love and belonging. As a fan favorite song asks, “What if we are right on time?” Ellis also has a member community on Patreon and meets with patrons weekly at 11 a.m. central time in a gathering called “Feelin’ It Fridays”.

Ellis released their tenth album, Ordinary Love, in 2020. Says Ellis, “My hope for this new album is that it both inspires a lighter heart while also expressing and connecting to the gravity of this moment in our human history. Can we greet our lives, each other, and even the news every day with ordinary love?”

A transplant from Texas to Minnesota at age 16, Ellis got their musical start at open mics and then grew a following while touring full time. Ellis has been recognized both for songwriting as well as for engaging performances. Having become a mainstay at a number of folk festivals, Ellis has been a repeat performer as well as voted “audience favorite” at Falcon Ridge Folk Festival, Moab Folk Festival, Sisters Folk Festival, and Rocky Mountain Folks Festival.

“If ever there was a feel-good folk musician, this is the one – somebody who really does
send you off feeling better about the world.”
—John Davy, No Depression

“Sometimes, seeing a performer live makes such a difference… when you actually experience someone like Ellis Delaney in person, you leave much happier than when you came.”

“Ellis has a confident, enthusiastic, even exuberant, optimism that is both disarming and highly contagious. I defy even the most cynical Gen-Xer out there to go see her perform and not get a few joyful goosebumps.”

“One of the Twin Cities’ most enduring and endearing folk singers of the past two decades reiterates her warm, earthy and soulful style on her new album, ‘Ordinary Love’.” —Chris Riemenschneider, Star Tribune (2020)

“This CD celebrates the ordinary joy in a tumultuous time. Love extends beyond romantic love to love of family, friends and community. It’s a perfect time for an album like ‘Ordinary Love’.”